The modern Japanese writing system uses a combination of logographic kanji, which are adopted Chinese characters, and syllabic kana. Kana itself consists of hiragana, used Japanese words and grammatical elements and katakana, used for foreign words and names. Almost all written Japanese sentences contain a mixture of kanji and kana.

Chinese monks brought the Chinese script to Japan along with the Buddhist scriptures around the 4th century. Until well into the Middle Ages, the classical Chinese writing and education was considered exemplary for the Japanese. Even today, calligraphy is learned from the great classical calligraphers of China. The Western idea of ​​Eastern calligraphy is also largely based on Chinese classics. That’s why I teach both Chinese and Japanese calligraphy, although my training is Japanese.

However, Chinese and Japanese are completely different languages. Since a kanji character stands for a term, it was possible to map the meaning of the root words of the Japanese language to the Chinese

characters. In contrast to Chinese, however, Japanese uses inflections attached to the root of the word (e.g. for present and past). These endings and Japaese names could not be mapped in the Chinese character system. Therefore, a syllable system called kana was created. It consists of hiragana (Japanese 平仮名 or ひらがな) and the katakana (Japanese 片仮名 or カタカナ), which were derived from the Chinese cursive script.

At the imperial court of the 9th century, an independent Japanese style of calligraphy developed, largely influenced by women, which is based on kanji (Chinese characters) and hiragana (Japanese syllabary). This Japanese calligraphy strongly emphasizes the flow of movement. Not only the individual characters, but the entire representation is characterized by the flow of movement.

Ukiyo-e (Japanese 浮世絵, something like «images of the flowing world») is a collective term for a specific genre of Japanese painting and Japanese prints that reflect the attitude towards life and the world view of the emerging bourgeoisie and the broad majority of the population during the so-called Edo period. This notion of a «flowing world» also reflects well the mood of Japanese calligraphy. 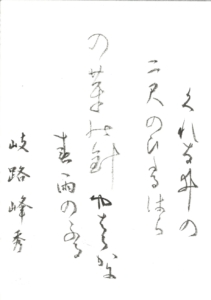